More than 3 million people have encountered stories of faith online through the Answered Prayer Challenge – an initiative of Eternal Wall of Answered Prayer and Premier during Lockdown.

Posts containing #answeredprayerchallenge and #makehopevisible spread in viral style across the globe with 1.3 million people engaging in the first 24 hours of the campaign in January.  By day 5, encouraging stories of answered prayer had landed in the social media feeds of 2 million people around the world, reaching 3 million at the halfway point of the campaign.

Founder of Christian landmark, Eternal Wall of Answered Prayer, Richard Gamble said: “An estimated 3 million people have already watched an answered prayer on their phone already, which is simply incredible. We just want to keep this momentum going, being able to encourage people – shining a ray of hope into people’s lives wherever they are.”

CEO of The Evangelical Alliance, Gavin Calver said he was delighted to take part in the Answered Prayer Challenge. Watch his testimony to answered prayer in the Twitter post below.

“The prayer that was answered most powerfully that I can remember, was as a nine-year-old boy at Spring Harvest,” Gavin recalls. “We were sat around and there was some teaching on prayer. They said if there is anyone in your circle who wants to pray for healing, then do that. Immediately, my friend James ripped off his sock and said: ‘I want healing for my verruca to go.’ I remember thinking that I didn’t want to put my hand on his foot!

“Nonetheless, we prayed and as a nine-year-old, believing that the Lord can do anything, I prayed that Jesus would take his verruca away. When I opened my eyes, I could not believe what I saw, as the verruca had disappeared. James foot no longer had the verruca on it….and the faith that has grown from that encounter has led to me, as a young man and now as an adult, praying for all kinds of things, because I believe that God can change stuff…”

“We want to gather even more answered prayers from Christians across the world, to demonstrate that Jesus is alive and relevant today as he ever was and is still moving amongst us. We can’t wait to hear your story and make hope visible.” Richard continues .

Richard hopes more individuals whose faith has been lifted during lockdown will still contribute to the Answered Prayer Challenge. He is encouraging selfie-style videos in landscape format to be uploaded to Facebook, Instagram and Twitter naming @eternalwalluk with the #answeredprayerchallenge tag. Contributors are then asked to nominate three friends to do the same.

About Eternal Wall of Answered Prayer

Eternal Wall of Answered Prayer is a project to build a Christian landmark in a prominent location in the heart of the UK between the M6 and the M42 motorways near Birmingham. This piece of public art will be made of one million bricks, each one representing an answered prayer shared by an individual from our nation and globally, over history and by the current generation. It will be a national landmark declaring ‘Jesus is alive, He listens, He answers’.

The vision of this project is to create a nation of storytellers; to transform the culture of the country, to become one where stories of the miraculous can become part of the nation’s consciousness; and that Christians are emboldened to share their personal answered prayer stories.

There are three elements to this vision being realised, to preserve the Christian heritage of the nation, ignite a faith for prayer on a national level and proclaim Jesus to the country. The structure will tower 51.5m into the skyline and will be seen by over 500k journeys per week, with expected visitor numbers of 300k per annum.

Richard is the visionary behind the colossal project to build Eternal Wall of Answered Prayer. Having the idea in 2004, he felt the go ahead to launch in 2015, and for the past five years Richard has shared the concept all around the UK, rallying people behind the belief that one individual’s answered prayer can be another person’s hope.

After becoming a Christian in 1990 Richard studied at Bible college and then worked for British Gas before leaving the big corporate world to make his mark in entrepreneurship, co-founding both a software business and a marketing consultancy. With a keen love of football, he became CEO of Sports Chaplaincy UK, and was former chaplain of Leicester City Football Club (before they were famous and won the Premiership!). Richard lives in Leicestershire and is married with three children.

Thu Jun 3 , 2021
Share on Facebook Tweet it Email Sadly Reinhard Bonnke (1940–2019) is no longer with us however the beloved evangelist will never be forgotten. He preached […] 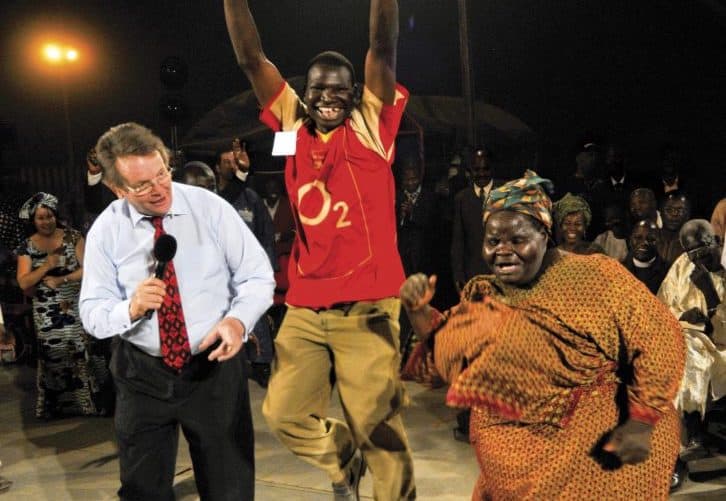