Our God is high and exalted. He is our sovereign Majesty. His character is supreme, his power unlimited and his will, paramount. At the name of Jesus, every knee will bow! The name of the Lord is a strong tower. Run into it be safe.

Luke 10:19
I have given you authority to trample on snakes and scorpions and to overcome all the power of the enemy; nothing will harm you.

While Jehoshaphat was king of Judah the Moabites and Ammonites waged war against him. This was a vast army intent on annihilating God’s people. Jehoshaphat resolved to inquire of the Lord and proclaimed a fast for all Judah. The people of Judah came together to seek help from the Lord. God’s word came to Jehoshaphat through the priest and prophet Jahaziel: “Do not be afraid or discouraged because of this vast army. For the battle is not yours, but God’s.” After talking with the people, Jehoshaphat called for praise and worship. Together they sang, “Give thanks to the Lord, for his love endures forever.” As they began to praise God, the Lord set ambushes against the enemy and it was defeated.

Your battle is the Lord’s! Listen, “No weapon forged against you will prevail, and you will refute every tongue that accuses you,” and “If God is for us, who can be against us?” The enemies of peace and security will rise. It’s a fact. However, the force behind these forces of man is Satan. The Scriptures tell us that our battle is not against flesh and blood but against the authorities, against the powers of this dark world and against the spiritual forces of evil in the heavenly realms. But we know that Jesus, our champion and commander in chief, personally overcame these authorities at Calvary when he made a public spectacle of them by triumphing over them through the cross. Halleluiah!

So, today, whatever war you’re facing, whatever forces are battling in the world, let us look to Jesus, our victor. Be still before the Lord and wait patiently for him. Don’t fret when people carry out their wicked schemes. Do not be afraid or discouraged because of this vast army. Praise and worship God in the face of the onslaught. Our God is high and exalted. He is our sovereign Majesty. His character is supreme, his power unlimited and his will, paramount. At the name of Jesus, every knee will bow! The name of the Lord is a strong tower. Run into it be safe. The battle is not yours, but God’s

“Oh Lord God Almighty I thank you for the Blood of Jesus shed on the cross, by which I have overcome the enemy. I testify to the Lordship of Jesus Christ in my life and my family’s life. I give you praise and worship, O God, for the victory of the cross and I praise you that every battle we face in this world is already won in your truth and righteousness. I confess, NO WEAPON formed against me will succeed! I confess I HAVE POWER OVER ALL the power of Satan, the force behind the forces of this world. I declare the name of Jesus over every circumstance in my life and every conflict I see in the world. The name of the Lord is a strong tower. I run into it and am safe. Amen!”

If you require more prayer, I’d love to pray with you. Please email dudley@godtracker.co.uk

Rest In the Glory of God Until these Calamities Have Passed

Fri Mar 18 , 2022
Share on Facebook Tweet it Email “So, rest in prayer and be still before the Lord. Do not fret when men carry out their wicked […] 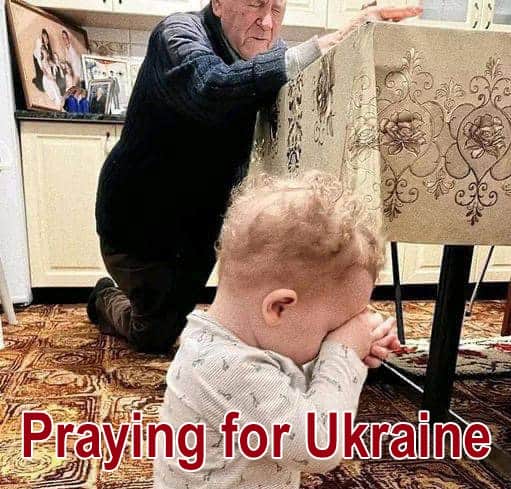